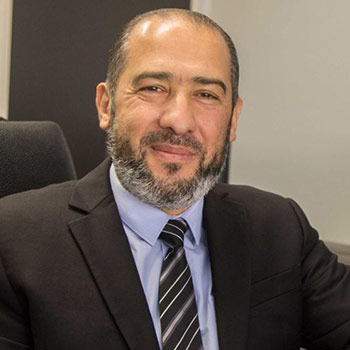 Dr Rateb Jneid, is a qualified Lawyer in Western Australia. Beyond Law, his expertise encompasses various areas of business, education, building and construction, land subdivision and import and export. Most notably, he serves on various community organisations, school and institutional boards.

In April 2017 Dr Jneid was elected President of the Australian Federation of the Islamic Councils (AFIC), which is the peak body for Muslims in Australia.

He is passionately committed to and involved in a number of community service initiatives, as well as outreach and welfare programs. From 2012 to 2017 Dr Rateb was the President of the Islamic Council of Western Australia, which is the peak representative body of Muslims in Western Australia, and whose aims are to ensure the progress and welfare in the spiritual, moral and social lives of the Perth Muslim community. His diverse involvement and contributions are evident by his involvement as Chairman of the Halal Committee of WA and Chairman of the Board of Governors at Langford Islamic College (2012-2017).

In the succour of the Muslim community, Dr Rateb has been instrumental in establishing and setting up a number of organisations and support structures to aid, teach and engage both youth and adults in constructive engagements, which include teaching various Islamic-related matters including Arabic as well as supporting young Muslims in Western Australia.

As the former Vice President of the Muslim Charity Community of WA, he has been energetically involved in Muslim Youth Programs in WA which focused on engaging Muslims in Western Australia in capacity building and entrepreneurial exercises.

His business expertise has been utilised in consulting and in providing guidance and assistance to these organisations in both the acquisition of land and the construction of buildings. He has abetted these organisations’ activities by implementing appropriate management processes.

As a prominent member of the Islamic community he has promoted and helped maintain unity, friendship and goodwill amongst Muslims and other communities both within and outside Western Australia, all the while ensuring the welfare, assimilation and adaptation of the Muslim community into mainstream Australia. His vision of a harmonious society is evident in his contributions to promoting positive intercultural exchanges and cross-cultural understandings within a society whose Muslims arrived in Australia, and in particular Western Australia, over the last 20-30 years in dire and unfortunate circumstances.

His spokesmanship and keenness in softening the misconceptions and conservative reactions that sometimes accompany organisations is an attribute that Dr Rateb extensively uses in educating local Muslim persons of influence to understand the inevitably of change and the need to adapt to that change in accordance with the Australian cultural and legal frameworks.

Dr Rateb is presently actively involved in the Islamic community, and holds memberships to various Islamic educational, religious and cultural associations, and his involvement in inter-cultural engagements via meetings with the Western Australia Police, the Halal Accrediting Associations in Asia Pacific, the Gulf and the Middle East, and AFIC is testament to his vision of promoting appropriate cross-cultural understandings and business acumen across Australia. Most notably, he is actively involved in dialogue with Western Australian authorities when there have arisen instances of cultural misunderstandings and misconceptions.